An electrician by trade, Minister Leane has worked for a variety of organisations in this capacity and later with the Electrical Trades Union.

Born in Oakleigh, he was only young when his father – a bricklayer who fought in New Guinea in World War Two – passed away, leaving his mother, a nurse, to work night shift to raise their family of eight children. He joined the Navy in January 1974, rising to the rank of Commodore in June 2016 and has worked as a Principal Warfare Officer in the Executive Branch, having completed many sea postings including exchange in HMS Liverpool, and two most successful Commands.

He was awarded a Conspicuous Service Cross for his leadership role as Chief Staff Officer (Operations) Maritime Headquarters during Operation Falconer (Iraq 2) in 2003. Greg also had a successful second career as a Management Consultant during a ten-year absence from the RAN.

Commodore Yorke was recently made a Member of the Order of Australia for his exceptional service to the Royal Australian Navy in senior command positions. 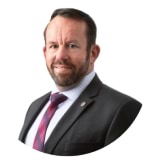 Aaron has dedicated his career to public service, from recent roles as a senior executive in the public sector including the Department of Veterans’ Affairs, and his service in the Australian Army with operational service in Iraq and Afghanistan.

Aaron’s achievements include supporting the Australian Ambassador in Turkey to strengthen multilateral relationships between New Zealand, Turkey and Israel to enable Government outcomes, leading a portfolio of veteran centric research projects targeting wellness and family support, and – for the ANZAC Centenary Public Fund – bolstering governance and operational frameworks to reduce a significant funding gap and deliver millions in public works.